How to define a space movie

When we talk about space movies, we can mean one of two things: movies that are simply set in space and science fiction movies.

These are so different in that movies set in space can have the capacity to be incredibly accurate, but science fiction movies are designed to be an escapist entertainment with obviously inaccurate things like aliens etc.

But it is interesting to peg them against each other and see which movies are the best in certain categories.

To start, I will list the different categories in which each space movie could be either accurate or inaccurate in and then we can discuss the differences between them all within each category.

This will be a list of mainly common principles in physics that a movie can either get wrong or right. The main thing to note is that any movie that uses any form of complicated or advanced technology will not be excused. 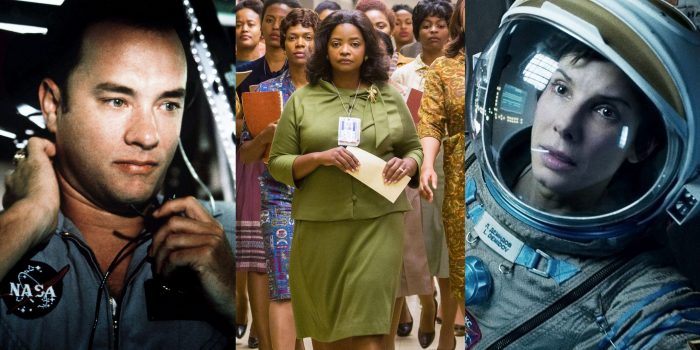 What about things that ‘could’ be possible?

If you are asking about aliens, yes these are technically a possibility, but we are not including the way that alien technology can explain away things in space movies.

If something does not adhere to the laws of physics, it is not going to be considered accurate in this answer.

In space, nothing that has mass can travel at the same speed of light in a vacuum. Even with extremely advanced technology, this kind of speed is not possible.

So, the spaceships that travel at lightspeed to get to other galaxies etc. are not obeying the laws of physics that we know of. These voyages would take years, but that would not make for an entertaining movie!

Essentially, whenever a spaceship speeds up, the passengers inside will be violently thrown back thanks to something called inertial force. These forces are caused by the objects themselves and are therefore impossible to stop.

Also, every time a spaceship slows down from an acceleration, they will be thrown forward thanks to the same inertial forces. This is not often seen in space movies because it would look messy every single time the spaceship in question sped up or slowed down. But that means these films are inaccurate.

It is a fact that there is practically no air in space. That is to say that space is very close to a vacuum and sound cannot travel in a vacuum. This is the most common physics principle to be broken by space movies.

The most obvious movies being the Star Wars franchise, in which all of the spaceships and laser beams make such a racket that you would be excused for mistaking it for a game of laser tag.

But the reality is that there is not enough air in space for sound to travel via vibrations.

This is similar to the 3rd point in that it occurs in a spaceship and almost all space movies ignore this. The reason that a spaceship would have to spin is because artificial gravity needs all objects to feel an equal force in the direction of ‘down’. This is because ‘down’ is just any way that is towards gravity.

All physical objects share mass as a property. This means that artificial gravity acts on an object’s mass, this leaves gravity and inertia as the only things that can be considered.

Gravity is ruled out because it is not present. This means that inertial force is the only thing that can be manipulated to create artificial gravity. Inertial forces are created when the frame of reference (in this case the spaceship) spins and accelerates in a linear fashion.

On the topic of laser beams, they are actually not visible to the naked eye. This is only possible if the laser is being pointed directly at a naked eye, since light can only be seen if it is directly pointed to the eyeball or reflected off something else and into the eye.

This is a trope that is used by a lot of films for the entertainment effect and the shock factor. But human tissue is actually strong enough to withstand a vacuum’s pressure imbalance. Or, the pressure imbalance between the vacuum of space and the internal pressure.

This is an interesting one. A lot of space movie plots rely on the idea that a bad guy will get away because the weapon range of the good guys is not long enough.

But I space, there is no friction to stop a bullet or any other weapon. Laser beams will also travel forever in space since they are light.

When you see a spaceship race, or even one spaceship full of the good guys trying to get away form and evade the bad guys, you might see them bank when turning.

This is not possible in space because a banking turn requires an air cushion for the spaceship to bounce off. There is practically no air in space, so this is impossible.

In order for a spaceship to turn, it would have to stop, turn to reorient itself and then fire up and continue. No handbrake turns in space!

This is simply ruled out by basic mainstream physics, no explanation necessary. Time travel to the past would actually destroy the universe. But travelling to the future happens all the time! Just no past time travel is allowed, so Doctor Who is off the cards.

In our solar system the space is relatively hot because of the close proximity of the sun. In deeper space, the surroundings will be colder but dying of cold would take a long time simply because a vacuum is a very efficient insulator.

Space movies that show a lonely astronaut freezing to death with crystals on their face are simply inaccurate.

Since physicists are still at a loss when it comes to what a black hole actually is (in terms of what’s inside it), there are a lot of space movies that take this mystery and run with it.

But in reality, the gravity that we experience on earth is not dissimilar to that that a black hole exerts. If a planet finds itself near a black hole, it will orbit it instead of just being sucked into it.

In this case, a spaceship would have to be aimed precisely at a black hole in order to be sucked inn otherwise it would simply orbit it, or even slingshot on a sideways trajectory away from it.

This is possibly the point that is one of the most broken or ignored. In space movies, the engines of a spaceship will be constantly on and then be turned off to slow down.

This is not the case in real life. Spaceships do not experience the same friction that cars do, so when the engines are cut off, they will continue on the same trajectory until they reach something or until they are slowed down.

This is highly in deep space. They will not coast to a stop unless they are interrupted.

The effect of parallax in a car means that objects closer to the window will appear to travel faster than the objects that are further away. This applies with space travel too.

So, when you see the stars shooting past the window in a spaceship in a movie, this is inaccurate, as the effect of parallax has not been taken into account.

So, what is the most accurate space movie?

As stated at the beginning, the initial question does not seem to cater to science fiction movies. And this works out for the best because the merit of those movies should not be any less accepted even though the physics is not accurate in them.

The whole point of those movies is to escape and to accept the strange and quirkily impossible physics that they showcase.

This means that the only movies left are the ones that are not science fiction but are set in space still. These are movies that do not exhibit things like aliens or even unexplainable physics, but most of the physics included should be accurate.

In the year 2020, the best and most accurate space movie in terms of the physics that it exhibits is…

This is a movie that is based on a novel. Talking exclusively about the movie, since that was the question, this is the most accurate space movie to date in terms of physics.

The plot follows a botanist who finds himself stranded on Mars, and he has to find a way to survive a certain amount of sols (days on Mars) before there is any chance of retrieval.

Without spoiling the movie if you have not yet seen it, I will detail briefly why this is the best space movie in terms of its accuracy.

But that would imply that the laws of physics are not complied with. And that is simply not the case. The fact is that all of the movie plot is so well researched and adheres to even the tiniest detail of physics and space travel, that it feels so unbelievable.

But it should be believed! Because all of the science included does abide by the laws of physics that we know of, making The Martian (2005) the space movie with the most accurate physics to date.